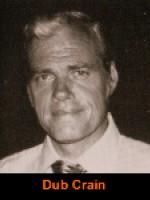 Dub Crain is best known to Dumas as the man who began the award-winning band program for Dumas High School.   He was from a family of music educators; his father was a renowned band director in New Mexico and Texas.  Dub’s music education was not just from his home, but from his experiences as well. He enlisted in the Navy during WWII and spent part of his time in the Navy Band and part of his time fighting for his country aboard an aircraft carrier in the South Pacific.

After the war, Crain’s life focused on loving music and teaching others to love it as well. He spent most of his career in Dumas as the High School band director.  He created the tradition of an award-winning program.  His bands collected a plethora of first division and Sweepstakes trophies and produced an abundance of men and women who appreciate the importance of music, working together for a common goal, loving their country and giving back to their communities. All these, they learned in part from their association with Dub Crain.

Born to a family of musicians, Dub Crain continued the legacy of music education in which he grew up.  A master musician and a master educator, Crain lives on in the hearts of the thousands of students who participated in his band program.  His legacy still lives on.