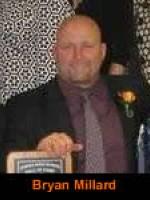 “I do my job, and someone else gets the glory- and that’s okay with me.”  Instead of looking for personal glory, Bryan Millard has carved out a successful college and profession athletic career by being a lineman.  His devotion to being his best and working with a team to create success began at Dumas High School.  Though he has gone a long way in his personal life, he has not let success change who he is – Bryan Millard from Dumas, Texas.

Millard is anxious and willing to give back to all who have supported him in his personal and professional career.  He returns to the University of Texas, where he was a key player on four Longhorn football teams, to encourage others in their quests for success.  He is available to spend time with high school students to remind them that they determine where they go from here and that anything is possible if they set their goals and prepare to be successful – even an 11-year professional football career.

Bryan Millard set his goals, used his God-given talents, and created a legacy that proves hard work create success. Along the way, he brought others to success with him and used his accomplishments to help others succeed.